Everything you need to know about healthy aging : diet, fitness, stress, aging, prevention.

Nutrition is an integral part of life, and we now know that it is also a key element of healthy aging. After age 70, the main risk is no longer obesity or diseases associated with being overweight, but protein-energy deficiency or malnutrition. This risk is a real public health problem. However, long before old age, lifestyle and nutrition affect our health. But it’s never too late to do the right thing and “age better.”

Nutrition and health are inseparable at any age, but even more inseparable during aging. Aging is different for everyone. And in a particular person, the organs themselves age at different rates. That’s why the elderly population is very heterogeneous. Aging is a complex, multifactorial and progressive process. It is an inevitable biological characteristic of living organisms. Healthy aging and longevity depend on the successful dynamic interaction between biological, psychological and environmental factors. Primary aging is associated with genetic factors. So-called secondary aging can be accelerated not only by disease, but also by what we eat.

Nutrition is an important factor in individual aging processes.

Between the ages of 30 and 55/60, it is important to have an adequate, but not deficient, diet that includes vitamins and minerals. However, it should not exceed requirements, since frequent overeating, which is exacerbated by a sedentary lifestyle, leads to cardiovascular disease, heart disease and stroke, obesity and type II diabetes.

The role of nutrition is important both to avoid certain diseases and to limit the development or consequences of pathologies already acquired.

Recently, the approach to nutrition has become more global, i.e., medicine has begun to consider the impact of food on health also in the area of chronic diseases such as cancer, cardiovascular disease and diabetes.

Malnutrition: the most important public health problem in old age

Nutritional needs in older adults are not reduced because nutrients are used less efficiently. On the contrary, in order not to eat more, we must eat better in order to maintain our health. This means optimizing food intake, more physical activity. 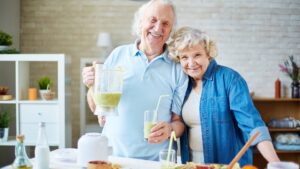 Without sufficient food intake, nutrients are taken from the body’s reserves: amino acids by muscle proteolysis, calcium by bone lysis, glucose by stimulation of neoglucogenesis, and fatty acids by lysis of adipocytes.

The consequences of malnutrition are significant because it leads to reduced anti-infective defenses, accelerated loss of muscle and bone mass, and thus increased risk of falls and fractures, all of which contribute to loss of independence.

Finally, inadequate nutrition has prognostic value. And for hospitalized individuals, the presence of malnutrition causes increased morbidity and mortality.

The physiologic consequences of aging, even in healthy individuals, affect digestive function. There is a real dysregulation of appetite, the sensation of satiety is delayed, taste and smell are reduced, digestion slows down, and finally, the dentition changes with age.

The loss of bone mass occurs in both sexes, although in women it occurs earlier, after menopause. Calcium absorption activity decreases and bone density decreases. The discrete inflammatory state is enough to accelerate the development of both sarcopenia and osteoporosis.

Finally, the role of vitamin D appears to be significant, far beyond its effect on bone health, as it is also important for muscle, immunity, and brain function.

The influence of nutrition on the onset of disease

Aging by itself is not the cause of eating disorders. It occurs only when aging is accompanied by degenerative and especially inflammatory pathologies, unfavorable environmental conditions (isolation, poverty, widowhood and life’s troubles) or psychological difficulties (depression and dementia, in particular Alzheimer’s disease). Psychological well-being should always be taken into account, as it plays an important role in maintaining good nutritional status, given that an elderly person may find themselves in a situation of psychological stress or even depression if they lose a spouse, or lose a pet, or have an argument with a child or a neighbor.

One of the biggest risks to quality digestion is snacking on sugary foods, which leads to a spike in blood sugar and the risk of developing insulin resistance.

Getting up from the table with a slight sense of hunger is healthy. But eating less food than you need leads to malnutrition, which is the source of many deficiencies. 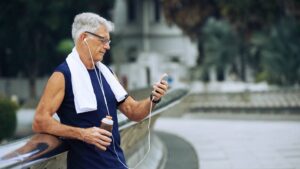 The metabolic changes associated with aging require an adequate intake of proteins of good biological value, including animal proteins (eggs, fish, meat), sugars necessary for energy metabolism, without increasing relative insulin resistance, Vegetables and fruits to provide them with vitamins and minerals (in particular antioxidants), as well as fiber, dairy products rich in calcium, protein, vitamin D and essential fatty acids present in some vegetable oils rich in Omega-3.

A distinction must be made here between healthy and sick people.

In healthy people, the diet must be adequate and balanced to prevent nutritional deficiencies, thereby delaying the aging process and preventing disease;

In sick elderly people, needs increase, often without a parallel increase in the diet, which subsequently leads to a reduction in some of the nutritional reserves and increased frailty.

Consumption must be monitored carefully to compensate for any deficiency over need. Daily intake of less than 1500-1600 kcal/day does not allow for optimal vitamin and mineral status.

Selenium and vitamin C are needed to combat oxidative stress;

To prevent loss of bone density – copper, zinc, calcium and vitamin D. The dosage of taking supplements should be determined by a doctor, depending on each individual.

Finally, water is an essential nutrient throughout life: it should be drunk regularly. Aging people have an impaired water metabolism, which makes them very susceptible to dehydration. At the same time, their sense of thirst decreases.

Diet and physical activity have a synergistic effect 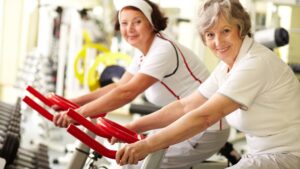 It is necessary to consume :

The role of nutrition is such that it is difficult to draw a strict division between the symptoms of malnutrition, bone fragility and sarcopenia, which overlap. On the other hand, it is absolutely certain today that maintaining a desire to eat with pleasure and an optimistic approach to aging is a reason to “age better.”

All programs of our medical center – Home.

Start with a simple step!

Book a consultation with our specialist
Request a call